On a patch of grass near Sri Lankan President Gotabaya Rajapaksa’s office in the commercial capital Colombo, around two dozen tents have been erected in a small but growing camp that is becoming the focal point of national protests.

Thousands of people have taken to the streets nearby and across the country in recent days to call for Rajapaksa to step down, venting their anger at soaring inflation and lengthy power cuts caused by the spiralling economic crisis.

On a handwritten board next to the tents, not far from the colonial-era presidential building adjoining Colombo’s water front, stands the sign: “Gota-Go Village”. 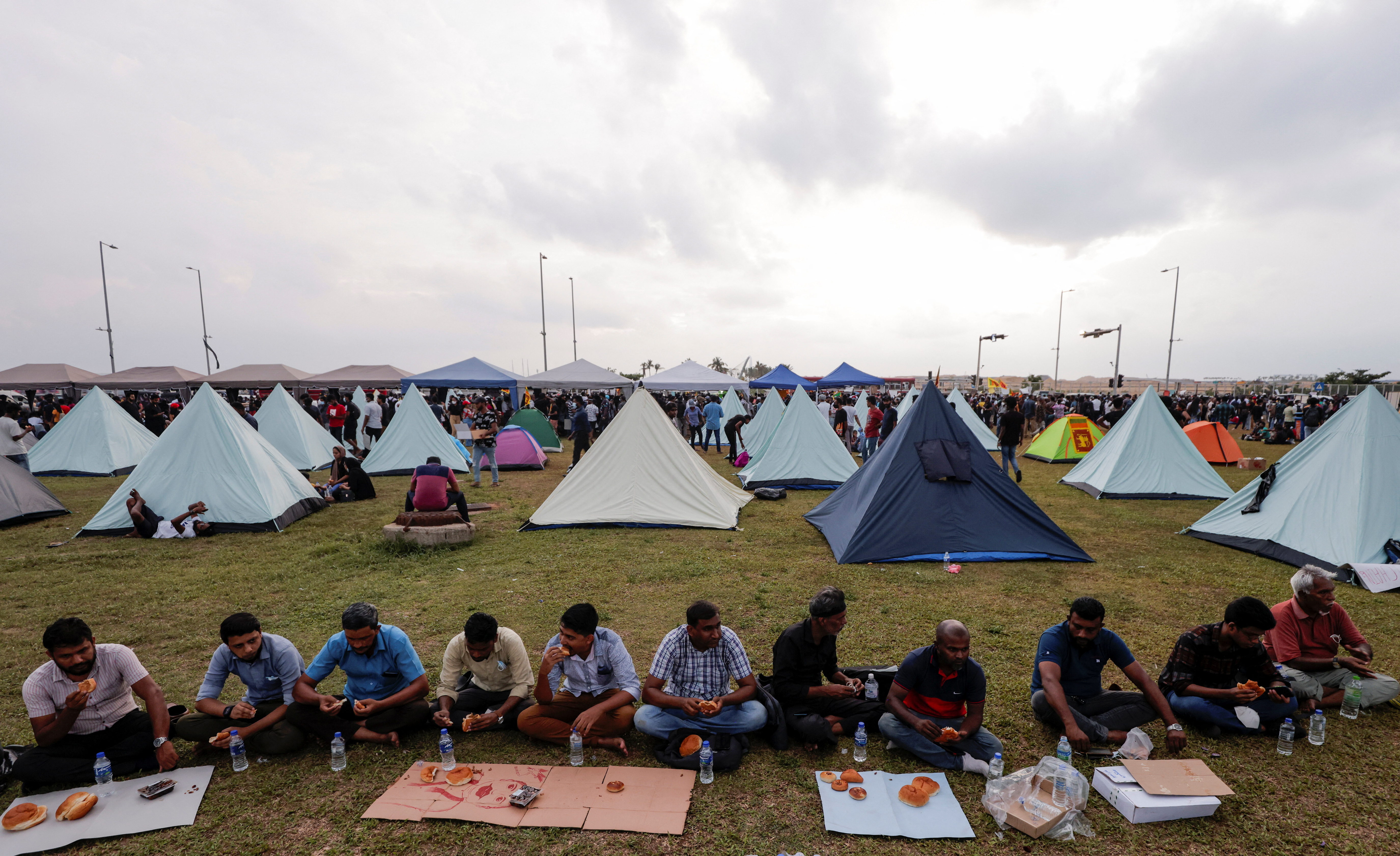 The slogan “Gota go back,” also referring to Gotabaya, is being chanted at demonstrations sweeping Sri Lanka, in an unprecedented public outcry that has brought together people of different faiths, ethnicities and social groups.

Close to the protest camp on Monday evening, a group of Christian nuns in white habits walked past a police barricade, atop which 11 protesters sat chanting. One held a poster saying “Our Govt Failed Us”.

A short distance away, three Buddhist monks in bright saffron robes stood amid the crowd.

At the edge of a lawn, behind some tents, around 30 Muslim men sat in two lines to break their Ramadan fast.

Farzana F. Haniffa, a professor of sociology at the University of Colombo, said the protest site had become a space where all Sri Lankans could come together in a rare show of unity.

One common cause was anger at what protesters said was economic mismanagement by the Rajapaksa family. 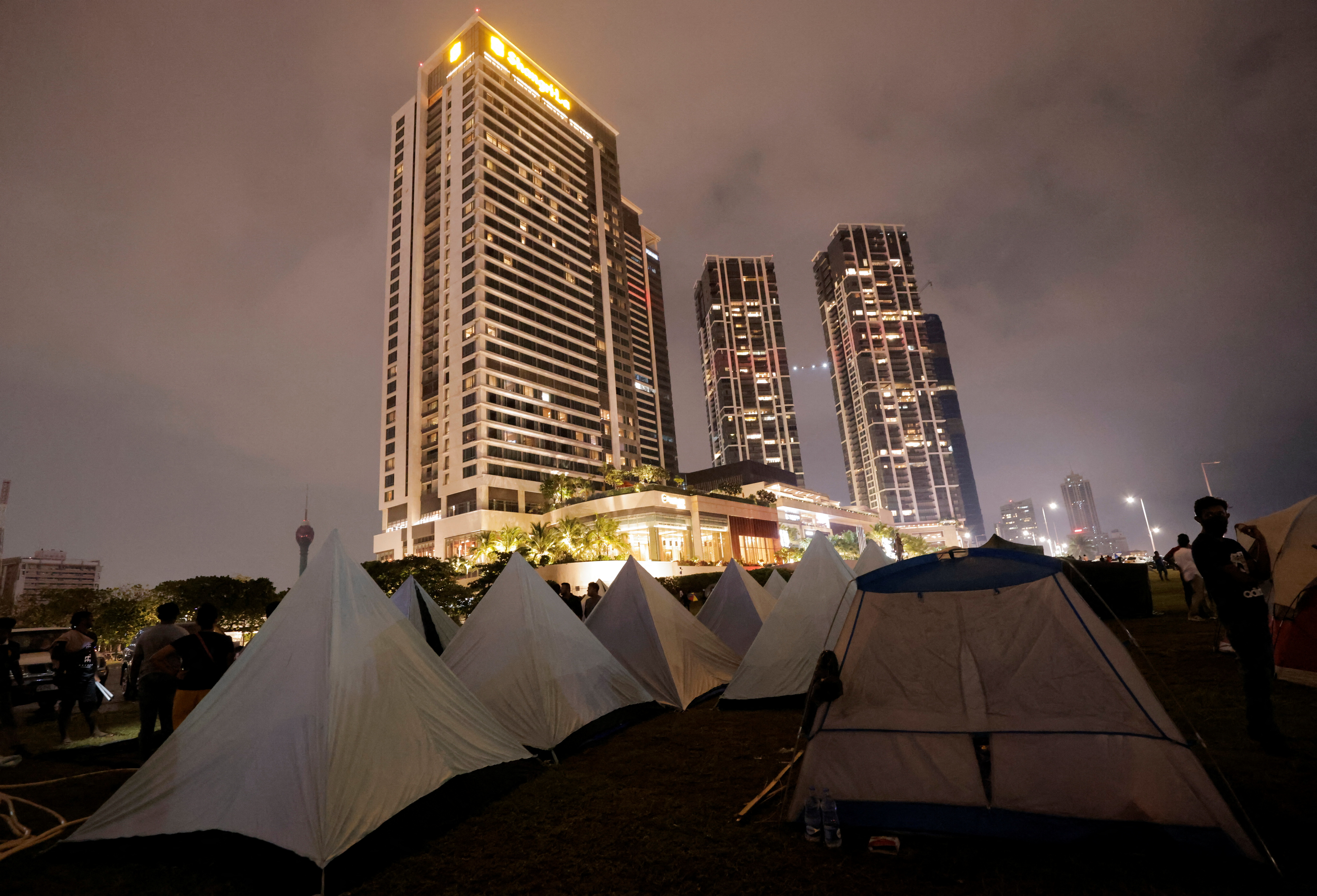 Demonstrators sit in a protest area, dubbed the Gota-Go village, where people are gathering in opposition to Sri Lanka’s President Gotabaya Rajapaksa near the Presidential Secretariat, amid the country’s economic crisis, in Colombo, Sri Lanka, April 11, 2022. REUTER

Mahinda Rajapaksa, the president’s elder brother, serves as prime minister and their younger brother, Basil, was finance minister until recently.

The administration says it is doing what it can to drag Sri Lanka out of a crisis that has left it unable to buy fuel and medicine and struggling to pay its debts.

Some protesters said they would only leave if the Rajapaksas stepped down. Mahinda Rajapaksa said in a televised address that the protests were hampering attempts to improve the situation.

Walking around barefoot early on Tuesday, after another night of heavy rain, Mary Suwen was rearranging tents that her husband had brought in from his adventure tourism business.

“The country is in a crisis so you can’t stay at home,” said Suwen, 27, a civil engineer.

“We need to pressure them,” she said, talking of the Rajapaksas. “They need to be accountable to the people.”

Gagana Atapattu, 22, said he was part of the election campaign that brought Gotabaya Rajapaksa to power in 2019, but now regretted working for him. 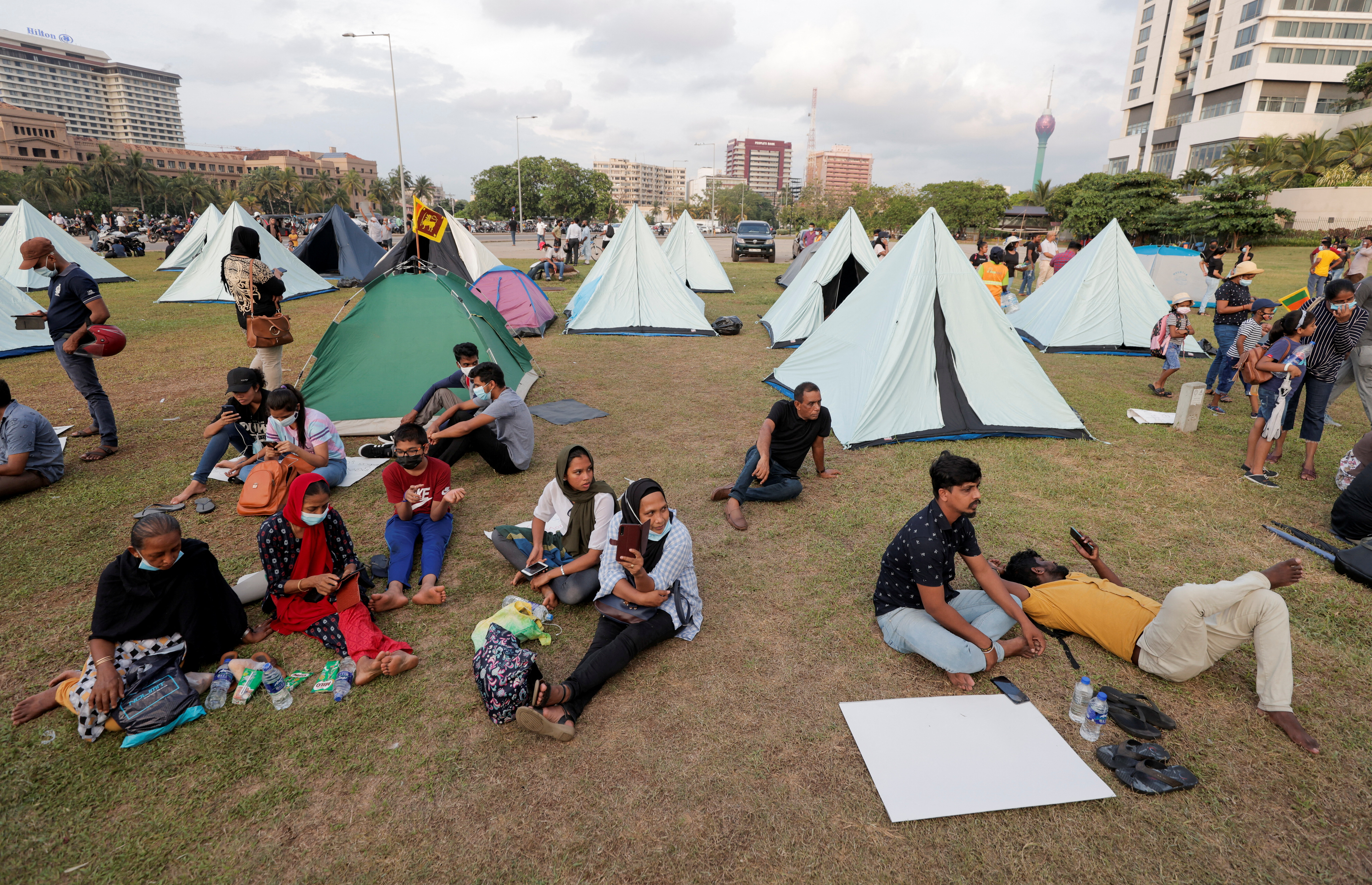 “I’m now suffering for what I did,” he said, as he helped to manage donations of food, water and other supplies that Sri Lankans were bringing to be stored in large open tents.

Among those donating was Y.C. Kanthi, who waited in a long queue for fuel and then drove 15 km (9 miles) to deliver a pile of buns stuffed with caramelised onions for the protesters.

“I gave a special order to a nearby bakery and had them made for these youngsters,” said Kanthi, 53. “They are our future, they are our only hope out of this mess.”