Another artistic milestone unlocked for Pakistan! On Thursday, Cannes Film Festival took to their official Twitter handle to announce that Joyland, a feature film by Pakistani filmmaker Saim Sadiq is selected to be screened at the 75th anniversary of the prestigious annual film festival. The category for feature films only takes in a limited number of 14 films and it is a moment of incredible pride that a Pakistani film made the cut—that too for the first time in history!

Actor Sana Jafri, who’s starring in the feature film alongside actor Ali Junejo, took to Instagram with a screenshot from Cannes official website that displayed their film’s name in the category Uncertain Regard. Talking about making history, she wrote, “Yeah guys, this is real. It has happened, history has been created again. [This is] the first Pakistani feature film at Festival De Cannes!”

As soon as the news got out, actors and directors from our entertainment industry took to their social media to praise the team behind the short film. Mahira Khan retweeted the announcement and wrote, “This is amazing! Congratulations to the entire team. And to Pakistan!”

Osman Khalid Butt also reshared the big “fantastic” news and wrote, “This is FANTASTIC. What a huge moment for Pakistani cinema. Congratulations, Saim and the entire team of Joyland!”

This is FANTASTIC. What a huge moment for Pakistani cinema. Congratulations, Saim and the entire team of Joyland! https://t.co/q79oopWz6y

Adnan Malik had a rather joyous morning, thanks to Saim Sadiq’s talent. He shared the news on his Instagram story and wrote, “This is some incredible news to wake up to. Congratulations Saim Sadiq and team.”

Oscar-winner Sharmeen Obaid Chinoy also took to her Instagram story to take pride in Saim’s achievement for the country. “There’s a Pakistani film at Cannes this year. Saim Sadiq, I cannot be more proud,” read the caption. 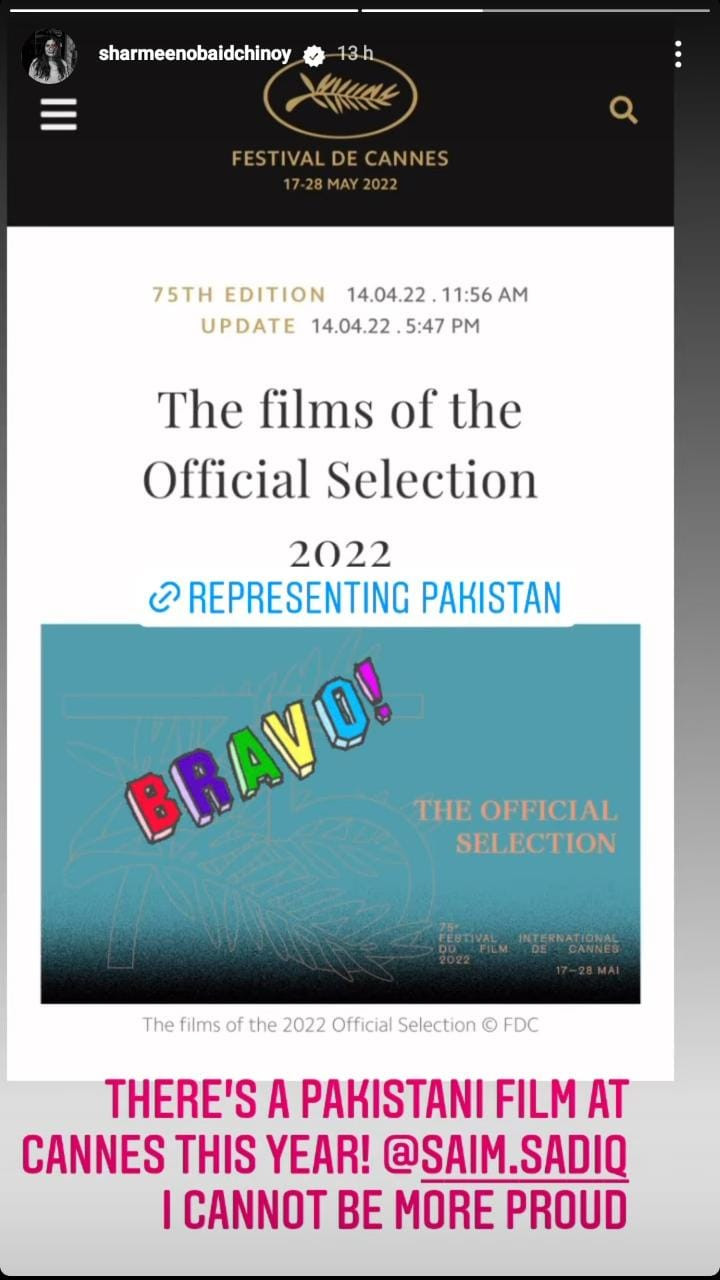 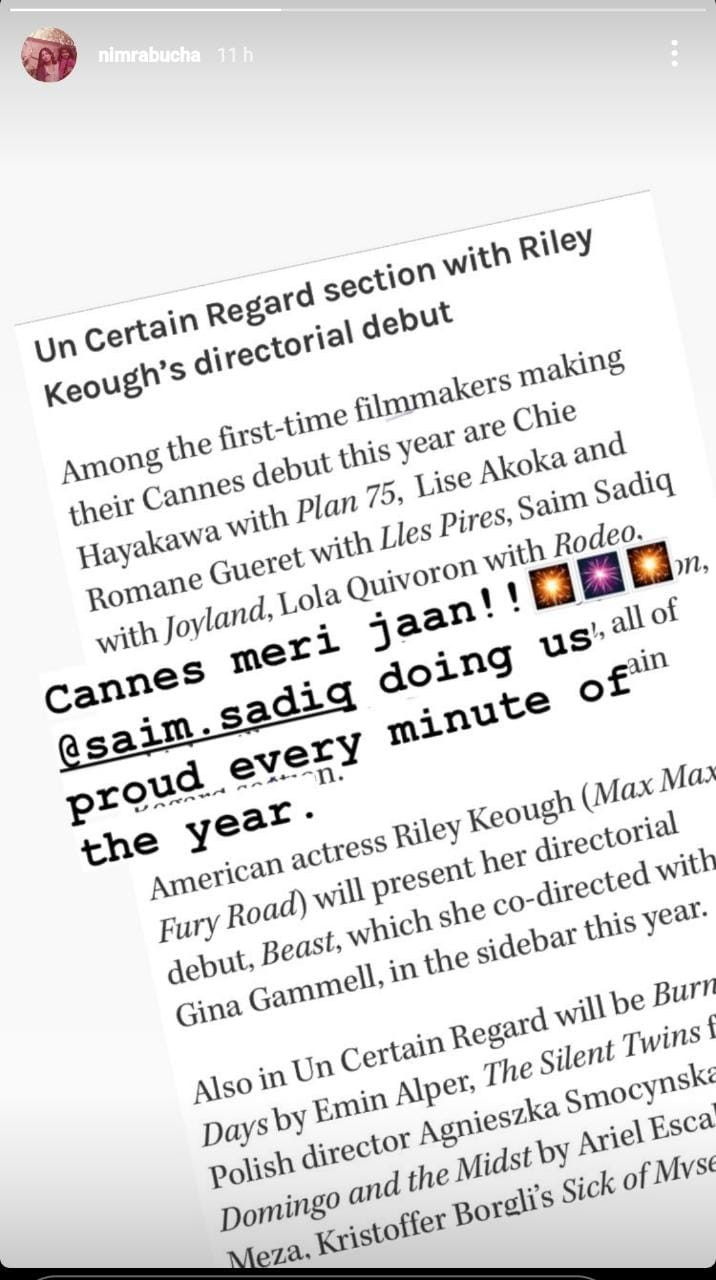 “So proud of you, Saim Sadiq! Mommy loves you” wrote Nadia Afgan as she posted Cannes’ official tweet on her story. 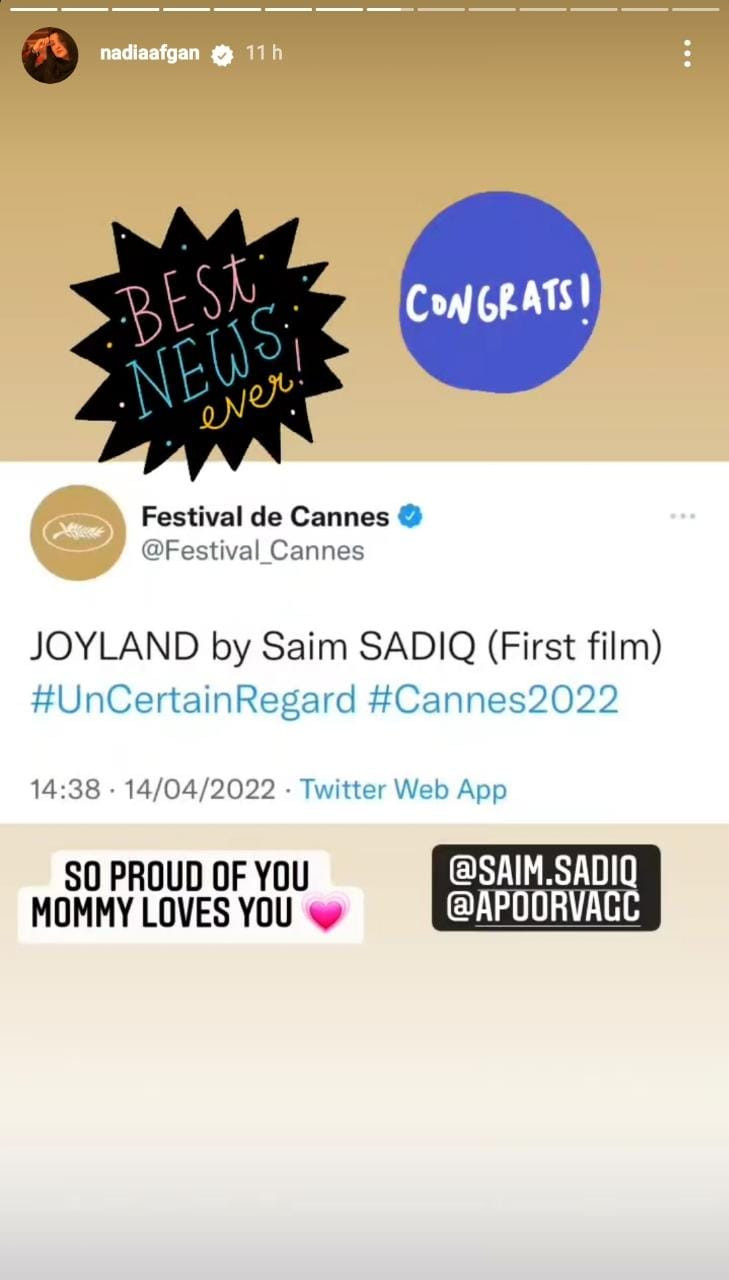 Many celebrities have also tagged actor Sarwat Gilani and director Sarmad Khoosat in their congratulatory posts. As per Saim, more details about the film will be revealed soon and we cannot wait! His debut is rumoured to star a trans character too.

While Saim has reached a bigger, new feat this year, this is not the first time he has made the country proud! His short film, Darling, won in the Best Short Film category at the La Biennale di Venezia last year.

Have something to add to the story? Share it in the comments below.