Pakistan Peoples Party (PPP) lawmaker Raja Pervez Ashraf took oath as the 22nd speaker of the National Assembly during a session on Saturday after he got elected to the post unopposed.

“Increasing the esteem and respect of this house is my aspiration and first priority,” speaker Pervez said, adding that it was his duty to uphold the sanctity of the Constitution.

He further added that the position demands “complete impartiality” and tolerance, “it is my responsibility to ensure the protection of rights of the house members.”

The speaker stated that the assembly had been “incomplete” as the former opposition was ignored. “It is my duty to not to let the voice of the opposition be suppressed,” he added.

“While Quaid-e-Azam’s address is Pakistan’s first official and national constitutional statement, it also affirms the central role of the legislature in the state,” Raja Pervez Ashraf said.

The NA session was initially chaired by Pakistan Muslim League-Nawaz (PML-N) leader Ayaz Sadiq, which included the voting on the no-confidence motion against Deputy Speaker Qasim Suri. However, Sadiq announced that Suri had tendered his resignation prior to the session.

The speaker’s office was vacant following the resignation of PTI’s Asad Qaiser prior to the vote on the no-confidence resolution against former PM Imran Khan.

The National Assembly session unanimously passed a resolution to posthumously award philanthropist Begum Bilquis Bano Edhi the highest civilian award owing to her “unparalleled services to the country and its people.”

The house expressed its “deep grief” over the passing of the Karachi based philanthropist, “whose incomparable services and selfless devotion to the downtrodden and disenfranchised have served and continue to serve as an inspiration for the world.”

The assembly acknowledged that philanthropists such as Bilquis Edhi are a “blessing” and her efforts managed to save over 16000 orphans.

“This house extends its condolences to the family, the Edhi Foundation, and to the entire nation over this irreparable loss,” the resolution read.

Earlier during the session, Prime Minister Shehbaz Sharif during his address stated that loadshedding was the result of the “incompetence” on part of the former Pakistan Tehreek-e-Insaaf (PTI) government. The premier stated that power outages were not due to a lack of capacity, as the country had the ability to generate 35,000 MW of electricity rather, he said, several new power plants were dysfunctional due to oil and gas shortage, claiming the previous government was responsible for “gross mismanagement.”

Earlier, the Power Division had informed the PM that there was currently no shortage of electricity in the country and power plants were closed because they either did not have fuel to run them or they faced technical difficulties. PM Shehbaz was further informed that 18 power plants in the country were not functioning for the last one year because of closed units or technical faults. 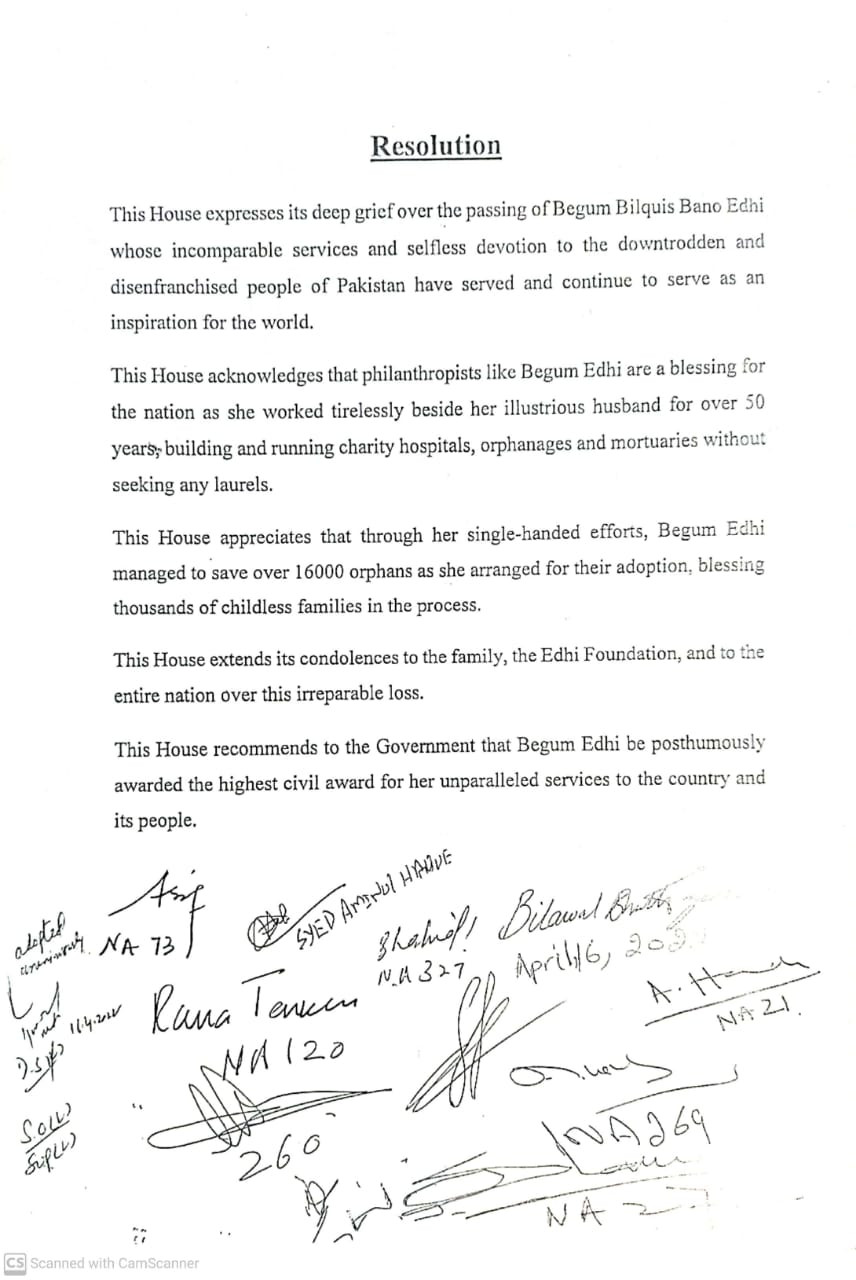