Actors Mahira Khan, Ahsan Khan, Sajal Aly and Maya Ali, among others, have taken to Twitter and tagged official accounts of relevant authorities to bring their attention to case of the missing teenage girl Dua Zehra, amidst political chaos in the country.

Fourteen-year-old Dua went missing on April 16 from the Golden Town area of Al Falah in Karachi. As soon as the news came into the mainstream media, social media users have been sharing Dua’s picture and information to find leads and help progress the case for her safe return. People are also condemning a mosque’s decision to not announce the news of Dua’s kidnapping due to her “Shia” name.

Joining in the voice of masses, celebrities have also taken to their social media handles to call out the selective religious discrimination and pray for Dua’s safe return. The Bin Roye actor took to Twitter to share that she’s praying with all her heart for Dua’s to return “safe and sound” and hopes that the girl comes home as soon as “today”.

Ahsan shared updates from the case on the microblogging site along with a picture of Dua and tagged the government of Pakistan with the hashtags “human rights” and “wake up.”

Maya tweeted, “This is absolutely heartbreaking.” As she requested the authorities to take “strong action” to quickly reunite the family again, the star added, “Can’t imagine what her parents are going through. Let’s pray together that she returns to her home safely.”

This is absolutely heart breaking💔. Can’t imagine what her parents are going thorough. Let’s pray together for #DuaZehra that she returns to her home safely. I request the authorities to take strong action and bring her back to her parents. 🤲🏻🤲🏻

On a Ramazan transmission, Dua’s father revealed that a mosque refused to announce the news of his daughter missing from the neighbourhood because of her Shia name. Sharing a clip from the show, Armeena Rana Khan wrote, “Let me get this straight they won’t put a call out for Dua Zehra because her name isn’t Sunni enough? Someone make this make sense.”

Let me get this straight they won’t put a call out for Dua Zehra because her name isn’t Sunni enough? Someone make this make sense. https://t.co/ex2UJyN9EK

Putting pressure on the authorities, Sajal shared that she’s “deeply saddened” to learn about the disappearance of Dua and that “authorities must get into immediate action” to safely return the innocent girl back to her parents.

Actors Osman Khalid Butt and Bilal Ashraf included her in their prayers as well.

Imran Abbas posted a screenshot of a news update that read “Police refused to find teenage girl who disappeared in Karachi on April 16.”

The Khuda aur Mohabbat actor wrote, “We demand, from the government of Pakistan and Sindh, an agressieve and immediate action against the abduction of Dua Zehra.”

Actors Yumna Zaidi, Hira Mani and Fahad Mirza took to their Instagram stories to help spread the news of her abduction to masses, hoping to find leads about her whereabouts. 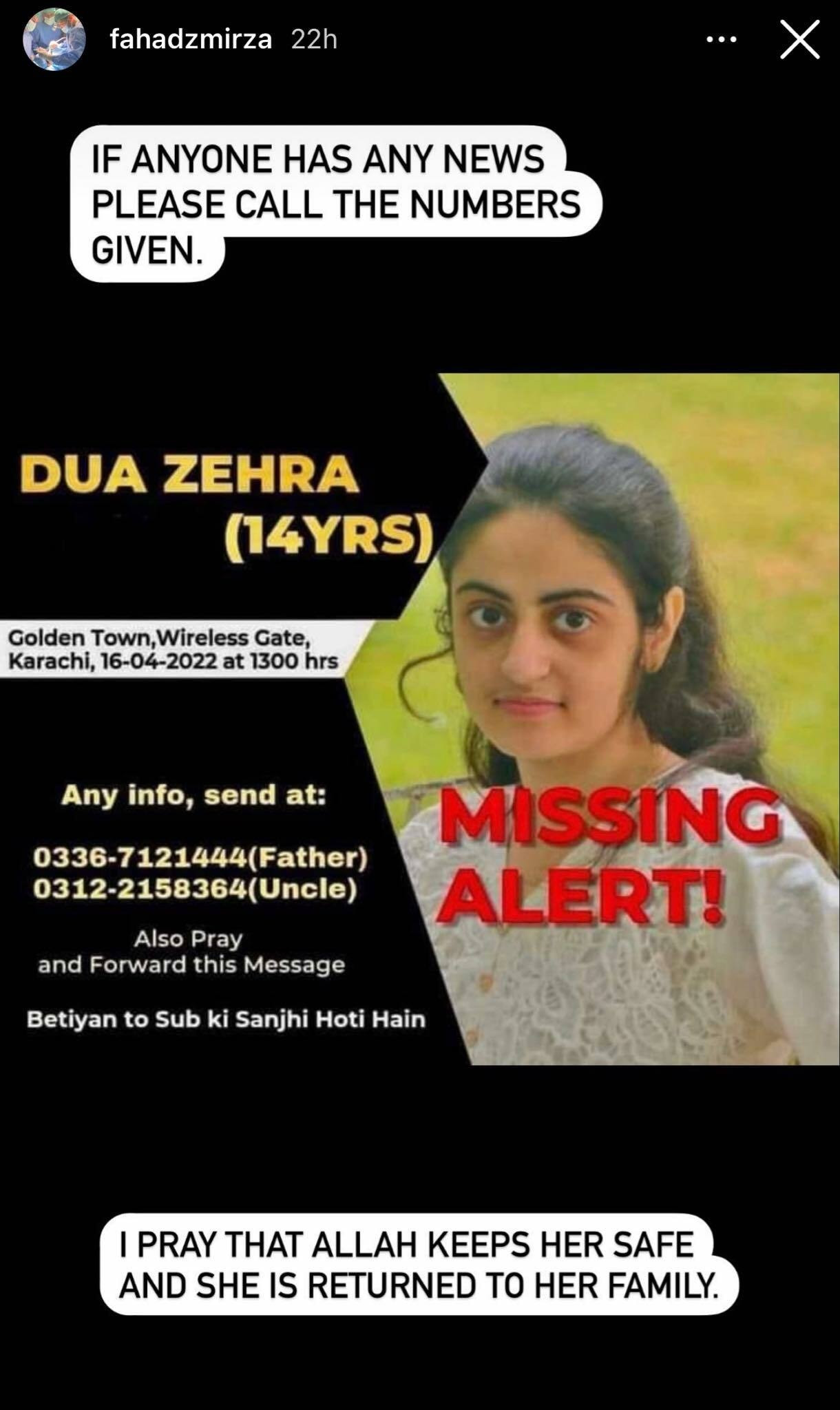 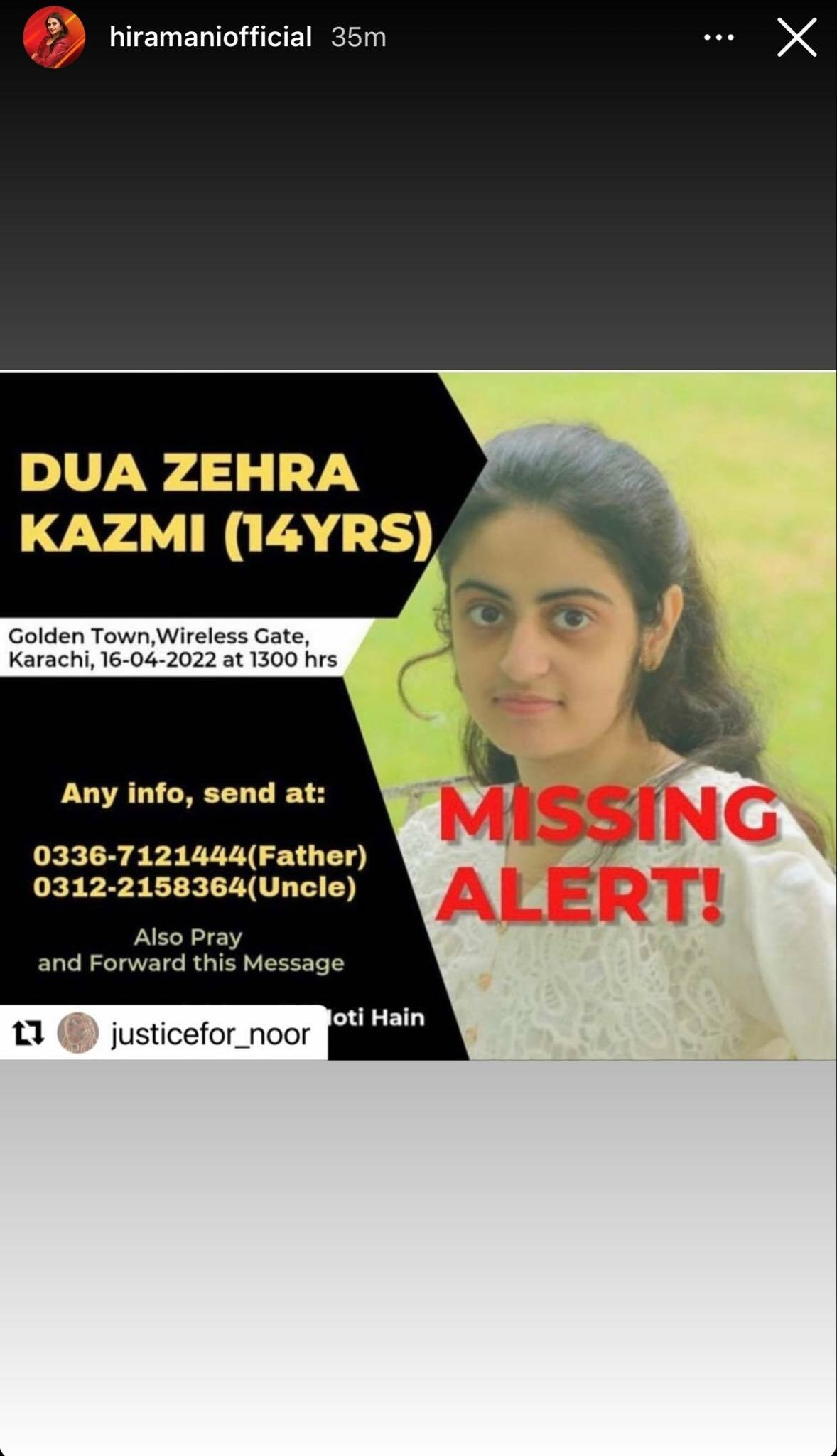 The teenager’s family registered an FIR on the same day after the kidnappers contacted the father for ransom. Investigations and raids are ongoing since six days to find the abducted girl.